US GDP shows largest quarterly growth rate on record, but recovery is far from complete 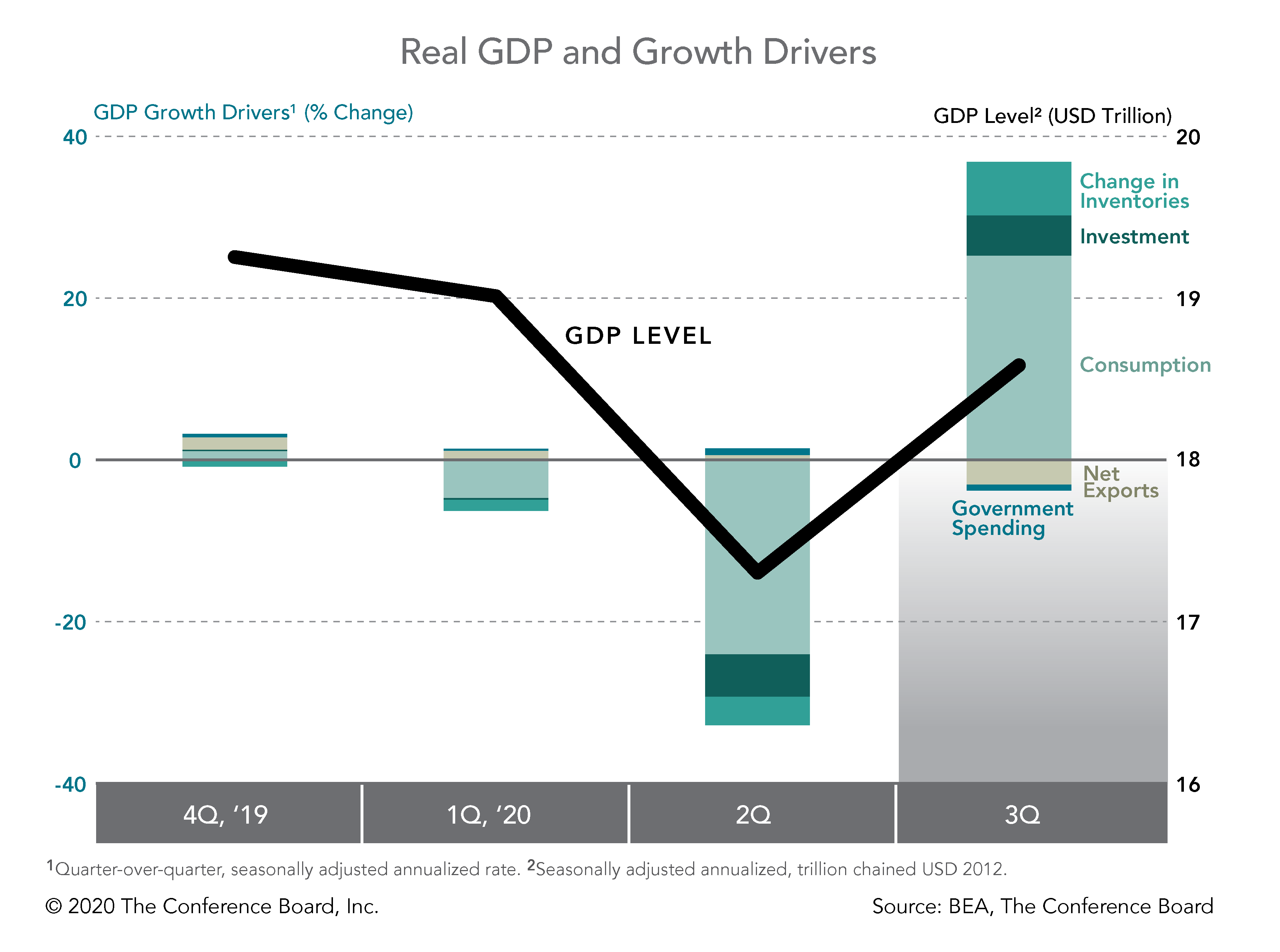 US real gross domestic product (GDP) expanded by 33.1 percent (annualized) during the third quarter of 2020, following a 31.4 percent contraction in Q2. While this was the largest quarterly growth rate on record, the US economy remains 3.5 percent smaller than it was prior to the pandemic in Q4 2019.

Third quarter GDP growth was driven primarily by a large rebound in consumption and stronger inventories and investment. While consumption was the largest contributor to overall growth this quarter, it remains approximately $436 bln below its Q4 2019 level (about 3.3 percent lower). Although spending on goods (many of which are imported) exceeded prepandemic levels, the strength was more than offset by a deterioration in spending on services, which are mostly produced domestically. Inventories, which fell sharply in the second quarter, improved in Q3 and contributed seven percentage points to overall GDP growth. Investment activities also helped Q3 growth. Residential investment exceeded Q4 2019 levels by $31.3 bln, but nonresidential investment was still down $136.7 bln. Meanwhile, government spending and net exports were a drag on growth in Q3. Government spending fell $38.3 bln, pulling overall GDP growth down by 0.68 percent. An uneven rebound in export and import growth yielded an annualized trade deficit of over $1 tln—the largest on record.

Looking ahead, given the resurgence in new COVID-19 cases, the limited recovery in the labor market, and uncertainty over passage of another fiscal stimulus package, it is unlikely that economic activity will significantly improve in Q4 2020. We anticipate incremental growth in the months ahead but do not expect the US economy to return to a prepandemic level of output until the second half of 2021. Nearly half of US companies surveyed report increased productivity since COVID-19 outbreak, but employee well-being is declining

US holiday spending on par with last year, but choices differ Outlook for the 2021 Proxy Season Executive Compensation in a Time of Crisis: Lessons for 2021 and Beyond Global Economic Outlook for 2021 and Beyond

Nearly half of US companies surveyed report increased productivity since COVID-19 outbreak, but employee well-being is declining

US holiday spending on par with last year, but choices differ 2020 Election: Achieving a Safe, Accessible, and Credible Election during COVID-19 Meeting the Upskilling Challenge: Training in the Time of COVID-19 What Can We Expect for Economic Growth in Europe in 2021 and Beyond?